[2021] Why Intersectional Activism Matters? Notes on the Afro-LGBTI Brazilian Experience

This series of public lectures focuses on these voices from the margins, their long-term conceptual and epistemological frameworks, and their forms and media of circulation and entanglements. With the first focus on feminist and LGTBIQ movements and ideas we invite experts and activists analysing South-North interconnections in the struggles for the rights of women and LGTBIQ groups in Latin America. 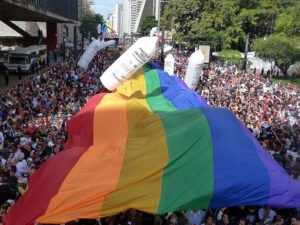 In his lecture, Dr. Vinícius Correia Zanoli (FU Berlin) will recover the trajectory of the LGBTI movement in Brazil, concentrating on the impact of the relationships between social movements in the consolidation of intersectional activism. Focussing on the trajectory and strategies of a Black LGBTI group from the peripheries in Brazil, he will stress how the group’s action and identity were influenced by the participation of its activists in different social movements, such as Afro-Brazilian religious communities, black social clubs and activism, LGBTI organizations, trade unions, and popular movements. Dr. Vinícius Correia Zanoli will show how the circulation of activists fosters the exchange of strategies, identities, and knowledge and, finally addressing how these exchanges are not a particularity of his fieldwork but a trend in contemporary Brazil.