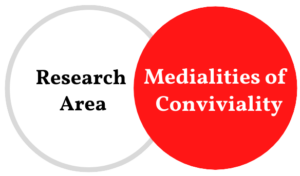 In our understanding of the nexus between conviviality, difference, and inequality, the dimension of knowledge and the ways and means of mediation are of crucial relevance.

Cultural heritage is also gaining relevance in the context of migration. When migrating, people take material and immaterial culture with them, adapt and re-signify them in the societies they move to, while remaining connected with their places of origin. Thus, migration creates new transcultural spaces and reconfigures networks between people, objects, and knowledge. Fluid cultural phenomena such as migrations challenge traditional concepts of cultural heritage and its transition into the digital world. The migration of objects, peoples, and 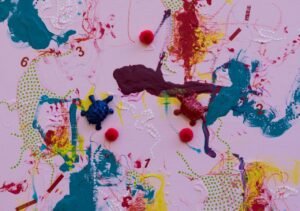 The Research Area: Medialities of Conviviality analyses, through the lens of inequality and difference, processes of co-production, circulation, and appropriation of knowledge, imaginaries, and representations. These processes include movements of persons, ideas, values, and objects. Practices such as writing, drawing, photographing, collecting, and exhibiting offer clues to the study of how notions of conviviality – for instance, utopias or mythical pasts – become manifest in objects that are produced, negotiated, and circulated in unequal convivial configurations. Digital transformation is shaping the circulation of knowledge in new and unprecedented ways, reducing old inequalities but also producing new ones. In our understanding of the nexus between conviviality, difference, and inequality, the dimension of knowledge and the ways and means of mediation are of crucial relevance.

We refer, on the one hand, to processes of mediation in communicative situations and social practices. On the other hand, to the structures that shape conviviality and configure the contexts in which interactions take place. Different knowledge forms and representations and, in more general terms, knowledge asymmetries, frame negotiations of interclass, interethnic, intercultural, and inter-gender relations. They also influence disputes over relevant social issues such as symbolic belonging, political participation, and the distribution of resources. Similarly, the heterogeneous, often conflictive modes in which individuals and social groups represent and symbolize conviviality are grounded in diverse, often unequal ways and practices of knowing. To understand how knowledge and representations are produced and reproduced in convivial contexts, not only interactions between social actors but also between humans and non-human entities have to be taken into account. In our understanding of medialities, we are using at least three interconnected dimensions on medialities of conviviality: the analysis of representations and identities in dispute; the differences of media genres and properties (including material and immaterial); and the tension between “inclusion” and “exclusion”. These interconnected dimensions of medialities will be analyzed in different convivial configurations.

A first cluster approaches archives, cultural heritage, and politics of identity within the framework of medialities of conviviality. For example, in recent decades, anthropological and natural history-oriented collections have become the starting point for debates on cultural heritage and restitution demands by indigenous communities. Processes of re-circulation and re-appropriations opened up new arenas of negotiation that put the paradox between conviviality and inequality at the centre. They re-position indigenous actors in disputes about meanings, relations, practices, and structures. This re-positioning does not only imply a historical re-contextualization departing from cultural diversity but also the creation of new knowledge in an immaterial and material sense. Archives (museums, libraries, etc.) and collections are contact zones where difference and inequalities meanings, practices, and human-object relations are negotiated. Diversity, openness, and incompleteness are crucial elements of living together in these contact zones. Diverse forms and practices of knowledge shape the multiperspective and relational character of objects. One example of studies we are envisioning is comparing imaginaries of Latin American cultures in museums in Berlin with its representations in music, dance, food, literature, art, or political activism.

knowledge-based practices seems ideal for exploring the limits of cultural heritage concepts rooted in the logic of the nation-state. In the context of migration, cultural heritage is reinterpreted in multiple ways; it is constantly subject to change since migration creates new cultural expressions combining elements of the cultures of origin and arrival. What are the medialities of conviviality in migratory contexts? What is the role of objects and cultural practices in the politics of identity of diaspora communities? What roles does social media play in these processes?

Archives are undergoing profound transformations because of digital transformation. Digitization is a new technique of high speed and broad range trans-border mobilization of objects. How is it changing the archive as a convivial configuration? Is it reducing knowledge inequalities, or is it creating new ones? How is, for example, digital transformation modifying the role of public libraries in Latin America for conviviality in societies characterized by cultural diversity and profound inequalities? Often these libraries are caught in a tension between heritage protection and the democratization of knowledge. Also, the increasingly massive use of social media can have quite divergent effects on democratic conviviality in Latin America. While social media can give pro-democratic forces new means of holding governments accountable and pressing for broader political inclusion, they can also amplify right-wing voices, including those against liberal democracy. How does the use of social media differ between different social and ethnic groups? What effects do social media have on the aesthetics of political messages? What significance do social media have concerning negotiating inequality and conviviality?

In the second cluster, dedicated to other epistemologies and representations, we will confront questions posed by the interdependent inequalities that have contributed to shaping (Eurocentric, white, and male) academic canons, as well as dynamics of marginalisation and inclusion of voices, especially indigenous, female, and of the so-called Southern Theories and philosophies. However, self-representations have emerged from indigenous women that show gender inequalities and violence, positioning other identities (individual or collective) and ways of producing knowledge (communiqués, songs, poems or films, videos, among others).  Likewise, in the academic context, indigenous women have had to fight for recognition as academics and demand to be included in contemporary debates on political discussions and knowledge production from other ontologies. Under these two axes of political action and positioning, indigenous women have highlighted the inequalities and asymmetries of knowledge. Still, at the same time, they have generated proposals for networks and transnational actions by women as expressions of the coexistence of diversity.

«We use at least three interconnected dimensions on medialities of conviviality: the analysis of representations and identities in dispute; the differences of media genres and properties (including material and immaterial); and the tension between “inclusion” and “exclusion”».

Also, since the conquest and the colonization, knowledge about (non-human) animals and plants has been an input in knowledge production and the global commodity circuits. In these processes, indigenous contributions have been ignored, and their territories have been transformed, becoming places of risk, contamination, or danger. In the face of these dynamics, indigenous peoples have begun to position their knowledge, practices, and ways of life by making their relationships with non-humans (plants, animals, land, water, among others) visible as networks of relationships that allow for the coexistence of life. In these contexts, we propose to analyse the changes in the social sciences (ontological turn) that enable the rethinking of non-humans, and that open up the positioning of other ways of conviviality. Concerning the processes of marginalisation/inclusion of voices, we will analyse the role that Latin American theories have played, and still plays, in the transformation of the social sciences and, especially, their reception in the global North within the framework of asymmetric structures within the production and circulation of knowledge. A paradigmatic example of circulation from South to North was the productive reception of dependency theories in Europe, opening the canon of social theory toward the south. We will discuss the possibility of a convivial canon. All with a view to making visible the inequalities and asymmetries of knowledge and processes of exclusion, to position new ways of understanding conviviality.

A third cluster involves medialities of conviviality within the framework of literature and cross-genres. We want to revisit the 1920s to study conviviality in a radical decade. The highly creative cultural production of the Golden Twenties emerged in an ideologically, politically, and economically tense, violent, and disruptive context, marked by differences and inequalities. The public space was shaped by new constellations of the sexes (the myth of the “New Man” and the imagery of the “New Woman”) as well as transgressions and re-negotiations of gender roles. We are specifically interested in the aesthetics and poetics of the 1920s, the modernities of the peripheries and Latin American cultural critique on mestizaje, transculturation and heterogeneity, and their actualization and resignification in today’s times. One thematic focus of the comparison are so-called popular cultures. Examples are literary discourses on cultural processes and conviviality in popular hispanic literature, stretching from Spain to Latin America, or the construction of national identities since the late 19th century, particularly in popular genres and their cross-media configurations, including tango, samba, and ranchera. These studies are complementary to studies in the Research Area: (Hi-)stories of Conviviality on conviviality of difference in Caribbean Literature of the 19th century.

Another dimension of the comparison is the presence and role of non-European cultures. In the 1920s, this became manifest not only in the growing interest in the so-called primitivism of the poetic avant-gardes, but also in innovative and radical thinking on the role of indigenous cultures. One example of this thinking is the Peruvian writer and intellectual José Carlos Mariátegui.  Considering the circulation of his ideas, we want to analyze representations of inequality and conviviality in the so-called indigenismo and neo-indigenismo in Latin America. In the context of Mecila’s annual focus theme for the years 2021-22 Indigeneities, the cultural representations and poetic agencies of indigeneities in a comparative perspective will be of particular interest.  Comparing 1920 and 2020 allows us to reflect anew on that post-war era of radical innovations, escalating conflicts (and often violent ways of resolving them), and to establish possible analogies and comparisons with current situations and current political, social, and cultural crises. The study of contemporary identity politics and contemporary negotiations of minoritarian identities in the arts, particularly new forms of representation and media, will complement the cluster. Examples are afro-brasilidade in music/video clips, new documentary and fictional audiovisual forms, and the transformation of the literary field via saraus, slams, and circulation on the internet: the openness and processual character of blogs resemble the kiosk literature and the literatura de cordel developed in the 19th century.