Postmemory: The Holocaust and its Effects on the Lives of Brazilian Jewry

Jewish-Brazilian post-Holocaust literature is a legitimate and integrated part of the global and transcultural efforts to work through the Holocaust.

Following the end of twenty years of military dictatorship in Brazil in 1985, a new literary phenomenon emerged, one that can be termed post-Holocaust literature. This literature consists mainly of short stories and novels by Jewish-Brazilian authors who, using a particular aesthetic involving so-called postmemory, traumatic realism, and blurred genres, work through Holocaust memory and its effects on the lives of Brazilian Jews.

My book A memória da Destruição na escrita judaico-brasileira depois de 1985: Por uma literatura pós-Holocausto emergente no Brasil (Peter Lang, 2022) provides a re-reading of texts published between 1986 and 2016, which have so far been discussed primarily as marginal and dispersed expressions of local Jewish ethnic literature. Instead, what I propose in my study can be understood as an act of theoretical-interpretive revival, reinterpreting the results of previous studies while aiming at a new systematic critical conceptualization that enables the identification of a literary corpus with common and distinguishable characteristics.

This aim is rooted in the perception of Jewish-Brazilian post-Holocaust literature as a legitimate and integrated part of the global and transcultural efforts to work through the Holocaust. Based on this, three hypotheses guide the definition, description, location, and contextualization of the subject of this study, which, after all, did not emerge in a vacuum but has a traceable historical genesis.

Based on this, I propose a second hypothesis concerning the emergent dimension of this literature. Emergence within a literary field, analogous to the cultural emergence defined by Raymond Williams refers to “new” meanings, values, practices, and relationships continuously created and received about what is dominant and generally established. Apart from being subject to the objective power relations within the literary field, emergence is viewed here as a characterization of a literary ensemble of particular substance and recognizable features.

Such a literary ensemble is defined as emergent when it irrevocably shares the conditions of the other ensembles that had emerged previously, even if it approaches them in a different way or, rather, approaches them through processes of selection and reorganization that favour change or rupture. In my book, I argue that emergent literature cannot be readily comprehended within the hegemonic view of literature or within the methodological and theoretical guidelines by which canons and national literatures are established. Finally, then, this literature has the potential to determine itself in relation to the cultural memory and historiography of the national, ethnic, regional, and global frameworks of the subject matter while forming its own cultural memory in Brazil. 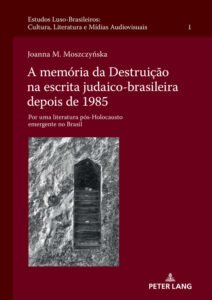 While the subject of the Holocaust can be found in Brazilian literature as early as 1946, the year 1986 marks a turning point and the beginning of a new chapter of its existence. It is evident that an authorized post-Holocaust literature started to emerge at this point in Brazil, and it now extends beyond the boundaries of Jewish communal memory as it strives to participate in the transcultural and transnational memory of the Jewish extermination, the contemporary post-traumatic culture included. Authorization, or authorized memory practice, is understood here, following David Roskies and Noemi Diamant, in the context of the diversity of styles and genres, reception, as well as the degree of (un)reliability of narrative instances. It is further reflected in the shift from the languages in which the Holocaust was lived to those in which it can be relived and mourned, as well as have its discourses deconstructed and re-examined. Emergence further refers to the public memory in Brazil that both shapes and is shaped by this literature.

The third hypothesis arises in response to the primary importance of testimony in the first theories of Holocaust literature in Brazil. The term “witness through the imagination,” introduced by Norma Rosen in her 1974 essay “The Holocaust and the American Jewish Novelist”, through which the emphasis is placed on aspects of transmission and distance, has been well received by some scholars of Brazilian literature due to the reception of witness theory in Brazilian research. Witness theory has been advocated particularly by Márcio Seligmann-Silva, who applied it not only to the Holocaust but also to the experience of Latin American dictatorships.

Nevertheless, using this term could lead to the loss of the specificity of testimony and the witness figure and eventually drift into a metaphor for fictional writing. Moreover, it could suggest a tension or even mutual exclusion between witness memory and imagination, which ultimately creates analytical problems and is counterproductive in the context of the witness theory. Therefore, I propose using the term “postmemory”, which is already well-established in the study of trauma literature. The term refers here to the aesthetics and the socio-cultural context of the authors who can be said to constitute a Jewish-Brazilian generation of postmemory.

This last hypothesis further states that this literature offers a response to the demands of representation and a reading of the collectively traumatic past. Those responses are given through aesthetics that can be identified in post-Holocaust literature produced in the West, producing acts of individualized memory inscribed in cultural and transcultural Holocaust memory discourses, and reporting on contemporary post-traumatic culture. Postmodernism, Robert Eaglestone argues, should be understood as the time when people began to think about the Holocaust. Put another way, postmodern thought is the response given to the Holocaust using what Geoffrey Hartman has called the “instruments born of trauma”.

Given the evolution of the Brazilian literary field in the last thirty years, the urgency to update and advance the state of knowledge is recognized here. The cultural studies-based literary analysis is carried out within the frameworks of filiations and affiliations of texts. The reading method employed is close reading, including intertextual reading, which is maintained in contrast to the idea of the full autonomy of the text.

This approach favours tracing the text’s inscription in other discourses, resulting in a multiple cultural and sociohistorical contextualization on which the meaning of the text and its “worldliness”, to quote Edward Said, are built. Here, Michael Rothberg’s concept of multidirectional memory resonates and is applied in the analyses as a method to capture the processes of negotiation, borrowing and cross-referencing between different collective memories whose actors create a dialogue between the manifold traumatic past and the immanent aftermath of World War II. It should be emphasized that the emergence of Holocaust memory itself has been inflected by histories of slavery, colonialism, and decolonization and has even entered into a multilayered dialogue with military dictatorships, as exemplified by the case of Brazil, whose post-Holocaust literature provides a space for polymorphous working-through of the legacy of structural violence.

Jewish-Brazilian post-Holocaust literature is a literary ensemble that offers new insights into local memory practices as they are in the process of relating to its own cultural memory and creating the memory of the Holocaust in Brazil. Thus, the texts by authors: Cíntia Moscovich, Roney Cytrynowicz, Samuel Reibscheid, Giselda Leirner, Halina Grynberg, Luis S. Krausz, Michel Laub, Jacques Fux, Paulo Blank, and Rafael Cardoso, contribute to and are influenced by the development of a new public memory space in Brazil.

Postcolonial Resistance and Ecofeminism in the Latin American Jungle Novel

Colonial processes have usually been intrinsically linked to the exploitation of natural resources. and terms such as Decolonization and the Anthropocene have become keywords in the context of late postmodernity, foregrounding that ways of narrating nature are gaining increasing importance as nowadays threatening scenarios of natural disaster and social injustice overshadow our completely medialized realties.

Against this backdrop, it seems worthwhile  to reach out and see look at how nature narratives have been used in a productive manner, this is to say, as an empowering moment of postcolonial resistance that denounces the exploitation of nature and indigenous people.

In this sense the research project aims to focus on an particularly fit literary moment that is famous for its entanglement of postcoloniality and nature writing, namely the Spanish American jungle novel (novela de la selva), which turned to the rainforest and the indigenous communities and emerged between 1924 and 1953.

It is crucial to understand that since the discovery of America, the representation of the New World’s nature has played an important role in the process of colonization. and that nature discourses are at the heart of the debate on Latin American identity: from Colombus’ diaries to Humboldt’s romanticizing views, the European imaginaries of the New World were linked to nature and the exotic.

Nevertheless, with Latin American literary modernity, a change in the representation of American nature takes place. Characterized by the search for an American identity of its own, the Latin American literature of the first half of the 20th century marks a significant turning point, and, indeed, unlike colonial utopian narratives that mask the exploitation of nature and colonial violence by idealizing pristine landscapes of a lost terrestrial paradise that are in need of European male management, the narratives of the novela de la selva deconstruct and subvert the colonial discourse by portraying nature as a moment of postcolonial resistance that opposes the white male master model. Thus, these narratives present their own perspective, denounce the inequality of colonial conviviality and describe the jungle as a space of power struggle and exploitation of nature, indigenous peoples, and women.

In this sense, it has to be pointed out that besides focusing on human and non-human nature, the project aims to cover an often-overlooked perspective. Thus it is outstanding that the conviviality between colonizers, indigenous people, rubber workers, farmers, slaves, traders and explorers, on the one hand, side and flowers, trees, bushes, omnivorous ants, leeches, hippopotami etc., on the other, is not only depicted as marked by unequal power relations and colonial hierarchies but foremost as traversed by gender issues.

Given the striking female characters and the gendered representation of the rainforest, the research project proposes an ecofeminist reading that highlights how the hyper-separation between culture and nature is accompanied by the separation between male and female and how the exploitation and oppression of nature go hand in hand with the oppression of women. Since gender plays a crucial role in the novels but has not been studied in relation to colonial nature discourse so far, this approach promises new insights and perspectives in the context of Latin American Ecocriticism.