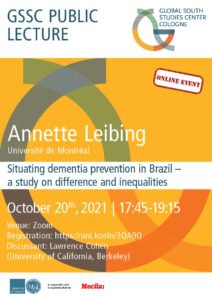 In this talk I part from the often-used descriptor of Alzheimer’s (AD) as a “democratic disease” and show how this idea – together with the equally common notion of AD as a “mysterious disease” – frames some people as at risk and others not. In fact, recent profound changes in the conceptualization of dementia has challenged previous ways of categorizing people, by transforming AD into something at least partly preventable – as less mysterious. My central argument is that this new insistence on difference regarding being at risk can be a moralizing and discriminating way of doing diagnosis, but that this notion holds, at the same time, unique opportunities for fighting inequalities. I combine scientific and media texts with data from ethnographies in Brazil, to make the point that good care is only possible when conceiving of dementia as profoundly undemocratic. This is especially true in a country like Brazil – Bastide’s “land of contrasts” – where the majority of risk factors and health resources are embedded in landscapes of aging marked by social inequalities.

The lecture is co-organized between the Global South Studies Centre, Universität zu Köln and Mecila.