Can politically inspired property damage or destruction be justified? This is the question that Professor William Scheuerman (University of Indiana) will discuss on 11 August – 2pm, at CEBRAP, at his Mecila Distinguished Lecture “Politically Motivated Property Damage”.

The lecture will be in English and questions can be asked in Portuguese or Spanish.
The event will be recorded and made available later on Mecila’s Youtube channel. 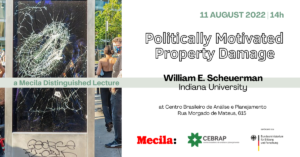 Can politically inspired property damage or destruction be justified? This question is hardly of mere academic interest, in light of recent political protests in Hong Kong, the USA, and elsewhere. Against some contemporary writers, I argue that placing property damage under an open-ended rubric of uncivil disobedience does not generate the necessary conceptual and normative distinctions. Drawing on Martin Luther King, Jr., I instead argue that property damage should not be equated or conflated with violence against persons; it also takes a variety of quite different forms. Anyone hoping to pursue politically motivated property damage should meet preconditions whose stringency will be determined by a key question: Do their acts generate or at least plausibly relate to violence against persons? Our answer to the question provides some limited space for legitimate, politically motivated property damage. Although some theories of property resist the strict delineation of violence to persons from property damage I defend, they fail to capture the realities of property ownership in existing societies, including the USA and, as such do not undermine my defense, under existing conditions, of limited property damage.